Florida Police arrested 25-year-old Ricky Joseph Handschumacher, charging him with grand theft and money laundering.  Handschumacher is allegedly accused of being part of a multi-state cyber gang that hijacked mobile phone numbers in online attacks that extracted hundreds of thousands of dollars worth of bitcoin and other cryptocurrencies from victims through their SIM Swapping Scheme.

Investigators believe that Handschumacher was part of a group of at least nine individuals scattered across multiple states who for the past two years have drained bank accounts via an increasingly common scheme involving mobile phone SIM swaps.

A SIM card is the tiny, removable chip in a mobile device that allows it to connect to the provider’s network. Customers can legitimately request a SIM swap when their existing SIM card has been damaged, or when they are switching to a different phone that requires a SIM card of another size. 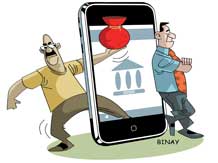 But in the hands of scam artists, they will attempt to trick mobile providers into tying a target’s service to a new SIM card and mobile phone that the attackers control.  These unauthorized SIM swaps are carried out by hackers who already have their target’s password.  Their goal is to obtain one-time code that gets texted to users before accessing bank accounts and other online services that send online authentication codes.

Swapping a SIM card at a mobile store isn’t a tall order.  In some cases, mobile store employees work with cybercriminals to receive unauthorized SIM swaps.

Investigators attained a search warrant to monitor the gang’s Discord server chat conversations.  Handschumacher was bragging about his acts of SIM swapping as well as what he plans to purchase with his earnings, such as property, cars, and jet skis.

The Discord server chat disclosed that the gang paid employees that worked at mobile stores to assist in their SIM swapping scheme.  There were chats about future attacks on bitcoin billionaires and cryptocurrency exchange companies.

Neither Handschumacher nor his attorney responded to requests for comment. The complaint against Handschumacher says that following his arrest he confessed to his involvement in the group and that he admitted to using his cell phone to launder cryptocurrency in amounts greater than $100,000.

Handschumacher’s attorney entered a plea of “not guilty” on behalf of his client, who is now facing charges of grand larceny, money laundering, and accessing a computer or electronic device without authorization.